Obama, Our Enemies’ One-Man Fifth Column – The Man Who Would Be Their King 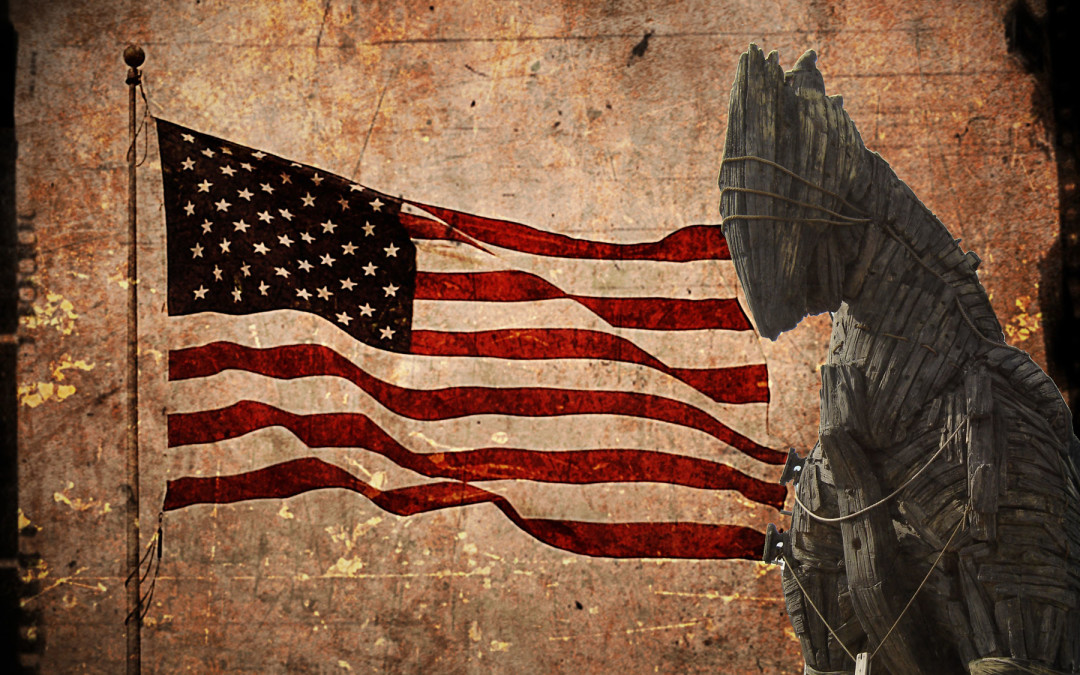 If you are unfamiliar with the term “fifth column,” you can think of it as an enemy army implanted inside the nation – like the Trojan horse – ever-ready to strike, relying on deceit to hide its presence, with that enemy army manned by cold-blooded traitors from within.

The game of chess teaches us that the king is of central importance to his side’s ability to achieve victory, even though his individual moves are very limited – one square in any direction only. Defeat would be guaranteed for any chess player, no matter how skillful, if he decided his king should play for the other side. What would you call such a player – self-destructive? Stupid? Insane? All of the above? And how characterize such a king?

By electing Obama president, America has chosen precisely that path of deliberate self-defeat – for itself, its allies, and what used to be called the free world. Throughout his presidency he has tirelessly weakened our military and economy — virtually bankrupting us and our businesses with endless, deliberately-squandered spending and crushing regulations, and deliberately harming our strategic position and that of our allies relative to self-declared enemies, including actual terrorists. He has taken every opportunity – often supported by cheering from Republicans, including John McCain – unilaterally to weaken and even disarm our military, often under the pretense that he was engaged in a “deal” with strategic rivals/opponents, such as Russia and Iran.

To summarize: Obama has deployed every power, legitimate or otherwise, available to him as president, to engineer and promote America’s economic and military decline. With the decline of a nation, as with a family, all its values perish; with that destruction, so also perish all its moral force and strength. That destruction has been his all-consuming purpose.  A full catalog of all his deliberately-harmful actions with respect to America would run to many volumes.

Here are a minuscule number of such actions:

He has deliberately emasculated – and so demoralized – our entire military, forcing it, among other insults, to pretend that self-identified homosexuals, transexuals and women in combat units will not result in decreased lethality and increased American casualties. He entered into a nuclear treaty with Russia, ratified by the Senate, including many Republicans, which resulted in our reducing the number of our nuclear warheads and delivery systems, without Russia doing a thing. Indeed, Russia has violated all existing nuclear treaties and has been vastly increasing its nuclear capabilities with modernized weapons, something Obama promised, but has refused, to do with our severely-reduced, antiquated nuclear arsenal.

He has drawn on all his presidential powers to dictate rules of engagement and troop withdrawals to throw away our hard-won victories in Afghanistan and Iraq, under various pretexts (e.g., nonsensically claiming he had “no choice” in Iraq when we were the liberating victors with power to demand whatever we wanted).

He has been releasing all the most dangerous terrorists America has captured, under various pretexts, including trading five of the most dangerous for a deserter, all under the overriding pretext that emptying the Guantánamo Bay prison will enhance our strategic position relative to the terrorists – a preposterous proposition that has no evidence whatsoever supporting it.

Even the warfare he has permitted the military to engage in has been under rules of engagement calculated to waste the maximum amount of our most expensive weaponry for no strategic or tactical purpose, all to pretend that we are actually engaging in warfare against Isis, for example, whereas nothing of the kind is occurring. Isis could be eliminated within a month by a division of Marines if that were desired by Obama.

He has catastrophically endangered all of our allies in the Middle East by deliberately entering into a “deal” which is nothing but a gratuitous capitulation by us to Iran, facilitating its acquisition of nuclear weapons, even guaranteeing to protect it against any adversary, and providing it massive amounts of financial benefits – all for no possible strategic purpose since, at a minimum, no deal would be better than that “deal” with a terrorist state, a self-declared mortal enemy of America and Israel, with the blood of hundreds of Americans on its hands, which still holds Americans as hostages/prisoners.

Although while Obama was running for election and reelection he invariably was coy about his true views, he had made them plain in his two autobiographies, in a multitude of video interviews, his own voting record (further left than Bernie Sanders, the only self-admitted socialist in the Senate, and actively favoring infanticide while in the Illinois Senate), in his known admirers (unrepentant, admitted Marxist terrorists Bill Ayers and his wife, in whose living room he chose to begin his political career), and in his self-declared mentors, the anti-American Stalinist Frank Marshall Davis and the racist demagogue Rev. Wright, his minister for 20 years.

McCain and Romney, who nominally ran against him, each guaranteed his own defeat by constantly insisting both on Obama’s decency and desire for America’s success and prosperity, and that, at worst, he simply was not up to that task. In so doing, they succeeded only in convincing Americans they themselves were not up to the task – and that they were weak and insincere: the majority of Americans, who were not among those spellbound by Obama’s vacuous Teleprompter reading (what passed for “charismatic speeches”), knew  perfectly well who and what Obama was – and were horrified by those Republicans’ refusal to be honest about him — or even to fight.

So they stayed home in droves rather than vote for either of his pathetic “opponents,” who excelled only in proclaiming their defeat on election night. As Gen. Patton observed: “Americans love winners – and hate losers.” McCain and Romney were losers. They were the self-defeating kings who personally destroyed their own presidential campaigns, just as Obama is doing everything in his power as king to do to America itself.

There is no alternative explanation for all Obama’s presidential actions: he is our enemies’ fifth column – just as any previous American Stalinist would have been had he been able to win the presidency.