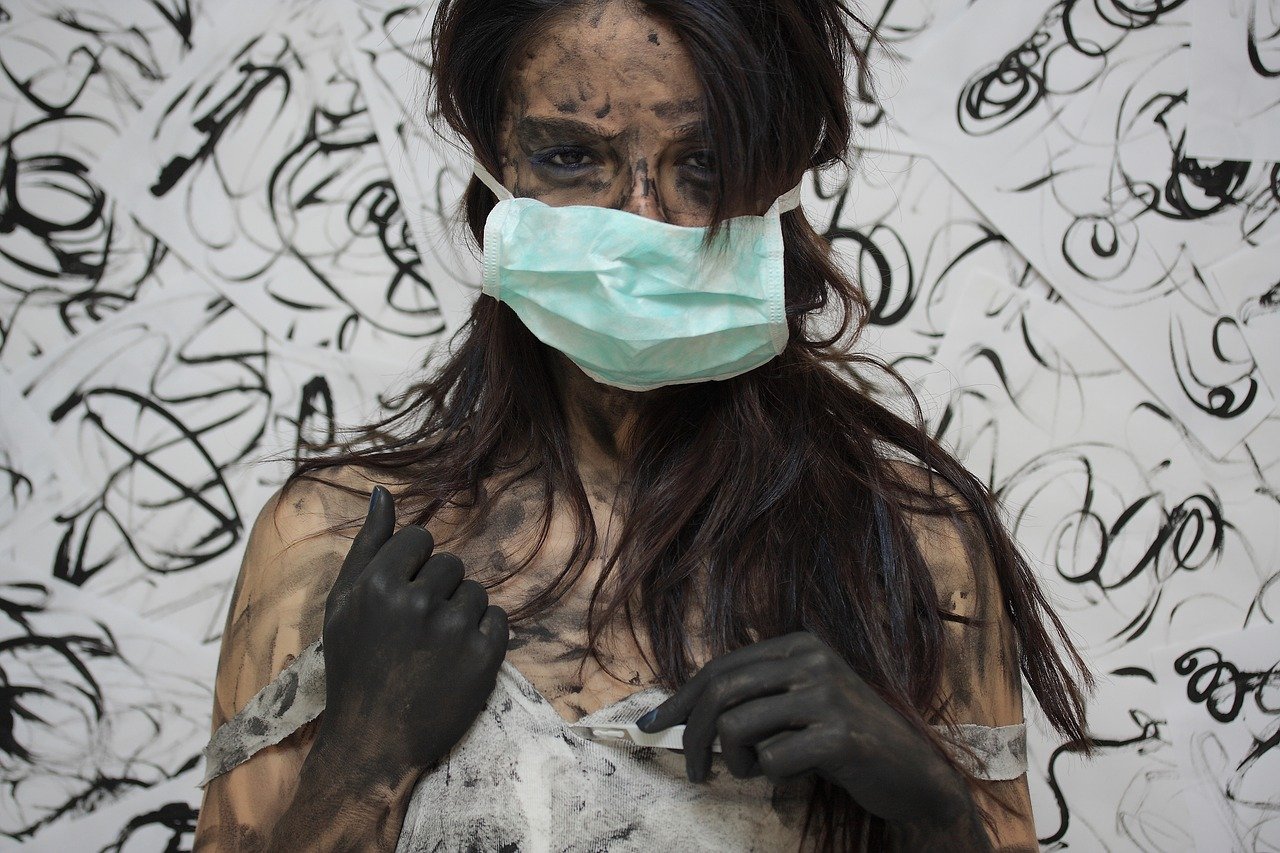 As the article and the video below shows, the insanity and stupidity, the genuine mental illness which is far worse than Covid itself, the complete derangement (there’s no other word for it) of the Democrats about Covid and their stupid mandates and what they claim is “science,” is almost beyond comprehension.

Now, in the face of overwhelming data to the contrary, they want us to think that their stupid mandates have cured Covid — at least that’s what they are pretending as their pretext for recognizing the cold, hard fact, the now-undeniable political reality (Biden’s popularity in California is underwater!) that they simply can no longer demand these things from the public, the vast majority of whom know that those mandates are worthless and deeply harmful, particularly to children. And even Democrat parents love their children.

Yes, the political reality is that now everybody knows the mandates have to stop because they are medically-pointless and have become nothing but signs of subservience — which is why the servants have to wear the masks at the galas, while the leftist billionaires and Hollywood leftists can laugh and drink and have fun without bothering with them, the same elitist leftists who still want to force all this stuff on everybody else.

But the one thing the leftist bureaucrats and politicians who have been demanding the mandates cannot ever even think about doing is to admit what everyone who has ever looked at the actual data and the actual science has known all along, to admit that the people – and there were always plenty of us, including real doctors and scientists – who said those monstrous politicians and bureaucrats demanding all that stuff based on the pretext of the virus were wrong all along, to admit that everyone who said they were wrong all along WAS ABSOLUTELY RIGHT, to admit that they, the emperors never had any clothes.

To admit that, yes, all that damage to the country and to peoples’ lives all their horrible actions caused was all absolutely, medically-pointless and worthless, and didn’t save a single life.

In fact, the very fact that their stupid mandates have been followed – that is, FORCED ON everyone – this whole time, and yet THERE ARE MORE DEATHS AND CASES FROM COVID NOW THAN EVER, and certainly no less, as one would expect if they had had any value whatsoever — even after having all these supposed “vaccines,” which were nonexistent in 2020, and forcing them on tens of millions of people, more deaths and cases than ever, proves that NOTHING that they did, NOTHING THAT THEY MANDATED — masks, business shut downs, social distancing,”vaccines”– NOTHING MADE ANY DIFFERENCE WHATSOEVER — to the virus that is, although all that insanity made plenty of difference to everything else.

And that is also proven by the example of Florida, in comparison with Democrat-run states, Florida whose governor has been vilified by the Marxist media as a virtual murderer, Florida which, with DeSantis as governor, has refused to impose any mandates since May, 2020, and which, notwithstanding its large elderly population — with the elderly being by far the most-vulnerable to the disease — has far from the worst death rates from Covid (or rather WITH Covid, since the CDC doesn’t want us to know the actual numbers of deaths FROM Covid) in the country, far lower than New York or New Jersey or Michigan or Illinois, where the mandates have been most insane and strict.

The virus was always going to do what virus was going to do, no matter what politicians or anyone else could do about it, with the government’s only ability to even assist being to get out of the way, permitting private companies to develop cures and vaccines (if they could), with the least interference from government possible.

Because nothing works against a respiratory virus other than pharmaceutical treatments, cures and vaccines. And everyone who knows anything about anything has known that all along: Masks don’t work, business shut-downs are idiotic (based on which businesses bureaucrats decided were “essential”), monstrous and totalitarian, and social-distancing and shut downs of all kinds are absolutely medically-pointless — and, unfortunately, we don’t have a real vaccine yet. Just like we don’t have a real vaccine for the flu, and we probably never will.

And pretending we have one is insane.

The “vaccines” have had more adverse consequences than any real vaccines for real diseases which have ever been permitted even to be sold (let alone mandated!): over 1.1 million adverse reports to VAERS! And they, the politicians and bureaucrats who have taken unconstitutional power for themselves over the public based on the pretext of the virus, those monstrous, genuinely-evil people are doing everything they can to hide that fact from the public.

Just like they are hiding the fact that, however unpleasant it is to have the disease, statistically, no one is at risk of dying from it who does not have a minimum of two comorbidities, a fact we have known from the very beginning.

In the face of that very fact, perfectly healthy people, millions of whom have already acquired natural immunity by having had the disease previously, are being forced by politicians and unelected bureaucrats, in the name of “The Science,” (as if there were such a thing!) to be subjected to these “vaccines” — notwithstanding the fact that those people have no risk of dying from the virus whatsoever, anyone who doesn’t have a minimum of two comorbidities, particularly children — and particularly members of the military, police departments, nurses, doctors, professional athletes, highly healthy young adults, millions of terrific American people whose lives are being disrupted and ruined by mandates from politicians which have nothing to do with reality or science.

And we knew from the very beginning, with the experience of the people on the cruise ship in February-March, 2020, that Covid was always ONLY DEADLY TO PEOPLE WITH A MINIMUM OF TWO COMORBIDITIES. Yes, we knew that from the very beginning. And I know that everyone knew it because I knew it then from the available data, data available to everyone. And I’m just a lawyer. And everything the lying bureaucrats and politicians and their propaganda organs in the Marxist “media,” everything they all said to the contrary of that has been nothing but a pack of lies.

There was never any actual medical or scientific reason whatsoever to interfere, in the name of “saving” people from Covid, in the lives of the general population — particularly children who remain under mask mandates to this very day! even in states (like New York) where those worthless and unconstitutional mandates have been lifted for everyone else.

Everyone who the politicians demanding these mandates has under their thumbs (children, members of the military, etc.), everyone who doesn’t have the opportunity to vote against them, everyone who just has to salute and smile and obey, is who they are particularly going after. And they are doing it for the same reason bullies always do – because they can. Because.

And no, they haven’t saved a single life. And they have destroyed hundreds of millions of lives and untold numbers of businesses and our entire economy, and the mental state of the entire country. They have committed crimes against humanity, crimes of mass destruction on the population, on our economy and on our power (they are openly assaulting our own military in multiple ways!).

They never knew what they claimed they knew, and they never had the right to do any of the evil they have done

As to children specifically, Covid is a minimum of 10 times less deadly to anyone under 21, probably to anyone under 40 at least, than the flu. And it would have been considered child-abuse for any of the impositions children have been subjected to in the name of “saving them” to have been imposed on children as a result of the flu — ever. And it has been child abuse. There’s no other word for it.

All they did was amass power for themselves, power they simply have no right to in a free country. All they did was interfere in peoples’ lives, unconstitutionally sticking their noses into things they have no damn business doing.

Once politicians and bureaucrats can claim power to direct how people should manage their own health, there is no limit to what they can demand, no limit to what they can force on the citizenry — and that is why nothing is more private then any citizen’s health, and why the government must never have any of the monstrous powers they have been exercising over us in the name of “saving” us from Covid.

Even if they actually knew what they were doing, which they don’t, these powers they have claimed for themselves are worse than any disease.

They didn’t mitigate anything. The only thing they served was their own power and the destruction of this country. And they so indoctrinated otherwise intelligent and decent people, primarily Democrats, people who believed what all those liars, those fake “experts” and power-obsessed politicians (like Fauci and Biden and Trudeau, together, the faces of the true enemy of the people) have been saying, their own Democrat voters, that they have literally turned them into idiots, turned them into obsessives dedicated to following the nonsense they have been imposing on everyone, the masks, etc. — that now they can’t turn it off.

And they know they have to stop it, stop the mandates, because those mandates have become simply politically-untenable for them; and they are people who only care about acquiring and keeping their own power, power which is now threatened by their grotesque abuse of it in the name of “saving” us from Covid.

And so, simply in the interest of preserving their own power, they have to do it, have to turn off the mandates, while simultaneously having to pretend there was a reason to have had them all along, rather than no reason whatsoever — and they have to, purely for political reasons, do that in the face of the fact that there are more deaths and cases from the virus today than there were when the whole nonsense started in March, 2020! — before any cures or vaccines, or even pretend “vaccines” like we have had since November, 2020.

But, along with the complete lies and falsehoods about Covid and its treatments they have insisted on, they have instilled massive hatred in their own voters, hatred in those people for anyone who disagreed with the lies about Covid, lies they were insisting on everyone buying, lies about that “Science” that was never real science at all, undying hatred for anyone who refused to follow the mandates, anyone who said aloud that all the mandates were stupid and harmful to everyone – people like the truckers in Canada and elsewhere — and Trump supporters, of course.

And now they have created a population of genuinely mentally-ill people – the Democrat voters in America, people who have been so indoctrinated that they remain committed to continuing the mandates, mandates which only result in child abuse, and abusing all their fellow citizens, committed to firing people for no legitimate reason whatsoever, people hypnotized by the lies from the politicians and “experts” and committed to all of that.

And those same people, those Democrat voters who have been so hypnotized (there is no other word for it) would realize the insanity they have committed themselves to supporting and how truly insane and destructive to everything it is, if they weren’t totally blinded, and if they ever could even stop and think about what they have been actually doing to themselves and to everyone else all this time.

In response to: Amazing: NBC reporter admits Dems caught between reality and base who see masks as part of their identity.